"Quiet and self-involved, her hobby is making clothing and accessories."
―In Game Description

Antoinette (エンジュ Enju) is a character in Harvest Moon DS: Grand Bazaar. She is one of the eligible bachelorettes to court.

Antoinette is an independent and anti social person who finds it difficult to relate with others. She is standoffish, and seems to purposely push people away. Her father, Claude lives in town, but is often busy with work. Antoinette's mother works in the city as a famous fashion designer and never comes to visit her daughter.

Although Antoinette won't admit it, she misses her mother and is lonely at times. She doesn't seem to have many friends in Zephyr Town and prefers to spend time alone, although she can sometimes be seen with Sherry.

She loves fashion, clothing design, and hopes to become a great fashion designer like her mother.

Requirements: Antoinette is at a black heart.

Walk from the town to the waterfall area between 1pm and 5pm on a Friday, Saturday or Sunday during nice weather. You will see Antoinette who is standing by the river. As you approach her, she asks what it is that you want. She appreciates the quietness and being alone, as she enjoys just thinking. Antoinette notices that you're still standing beside her. She asks why you're not working on the farm instead.

You've noticed that Antoinette is usually all by herself. She tells you that she doesn't really know anyone in the village so it's easier for her to be alone. Antoinette explains that she use to live in a city but a little while before you arrived, she moved to Zephyr Town with her dad. Her mom stayed behind in the city because of her job as a fashion designer.

She suddenly finds it odd that she's telling you all these things, especially since she hardly knows you.

Antoinette thinks her mom likes her job too much, and wishes she'd make time for other things. You seem to be a person who has balanced your work with everything else. Antoinette thanks you for talking with her.

Many people go to the city to chase their dreams, but usually end up working a boring job to pay their bills. A lot of broken hearts can be found in the city. Antoinette thanks you for talking with her.

You startle Antoinette, who didn't expect you to be behind her. The bookcase you are by contains references books about clothes that belong to her mother. The books are about fashions, materials, designs, and so on from other cultures and time periods. The two of you browse through the books until Claude comes home.

He smiles and says it is unusual for Antoinette to bring someone home. Antoinette replies that you just happened to stop by. Claude thinks for a moment and then tells the two of you that he feels he came home early today, so he's going to go out for a walk. He leaves the house, and the two of you, alone.

She tells you not to worry about it because it wasn't your fault. Her dad is always trying to go out of his way to please everyone, which is why he didn't object to her mom staying in the city when they moved to the town. She's glad that her mom gets to pursue her dreams, but she doesn't understand why he doesn't want his whole family to live together.

Antoinette apologizes for being so emotional, but she respects her mom and isn't mad at her. She's glad that you're a good listener.

Yea, but she wishes that he'd think about himself sometimes. Antoinette seems to be lost in thought, and tells you it's nothing. You can keep reading the reference books if you want.

Antoinette has come over and she wants to talk.

You're right; she shouldn't of asked you about this. Antoinette decides that she's the only one who can make this decision, and sadly leaves.

Are you trying to cheer her up? It looks like you've succeeded though. Antoinette is going to take some more time to think about her mother's request and she thanks you for listening to her. 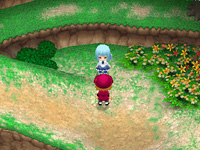 Walk from Zephyr Town to the waterfall area between 1pm and 4pm on a Saturday or Sunday (non-bazaar day). It MUST be Summer 5 of your first year or LATER.

Dirk and Antoinette nearly bump into one another while jumping up and down the hill. Dirk apologizes for almost bumping in to Antoinette and asks if she's alright. She tells Dirk not to worry and leaves.

Walk to the hotel area from Zephyr Town on a Thursday between 3pm and 5pm on a nice day. This event cannot be witnessed until AFTER Spring 21 of Year 2.

Dirk sees Antoinette standing by the fountain and tries to talk with her. Antoinette doesn't answer him and goes to walk away. Dirk pursues her, and asks why she ignores him. Antoinette tells Dirk that she finds it difficult to talk to other people. Dirk is relieved that's the only problem, he thought Antoinette didn't like him!

Enter the Zephyr Café on Monday, Tuesday, Wednesday or Friday between 12pm and 5pm. This event can only be seen until AFTER Year 3.

Marian, Joan and Dirk decide to take a short break from work. Joan goes to the backroom leaving Marian and Dirk alone. Marian asks Dirk what's on his mind. Dirk is still trying to figure out a way to get Antoinette to talk. Marian teases Dirk and asks if he has "special feelings" for this person. Dirk embarrassingly says that's not the case and that it's just somebody he wants to talk to. Marian suggest that the person he's trying to help probably knows how he's feeling and might start to show up more!

Antoinette then enters the cafe and asks Marian about an order she placed. She then notices Dirk and asks him if he works here. Marian butts in and tells Antoinette that Dirk does a great job and is very dependable. Antoinette seems amused by this and leaves. Marian then tells Dirk that she "told him so."

Enter Claude and Antoinette's house between 10pm and midnight on a Monday, Tuesday, Wednesday or Friday. It MUST be raining, and the event will not be able to be seen until AFTER Summer 2 of Year 4 or later. 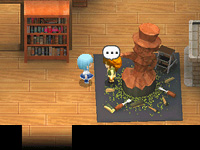 This event requires that you have not married either Antoinette/Angelo and that Angelo is at 40,000FP (5 hearts) or more. Enter Angelo's house between 8am and 1pm on Wednesday, Thursday or Friday when it's not snowing or raining.

Angelo is working on the statue when Antoinette comes to visit. She asks if she could look around while he works and Angelo agrees.

When Antoinette is through browsing, Angelo asks Antoinette if there was anything that she liked. She thinks about it for a moment and then tells Angelo that there wasn't anything that struck her as amazing. Angelo feels a little bit upset by this. Without saying anything else, Antoinette leaves.

After Antoinette leaves, Angelo vows to work even harder so that he can create something that will impress even Antoinette.

Antoinette notices that Sherry looks pretty cheery lately. Sherry explains that she has a new necklace and she's been receiving a lot of complements on it. It's the necklace that she got from Antoinette! Antoinette says that she made it special just for Sherry to match her hair and eyes. Sherry says she'll treasure it forever.

Retrieved from "https://harvestmoon.fandom.com/wiki/Antoinette_(GrB)?oldid=125286"
Community content is available under CC-BY-SA unless otherwise noted.