Attempting to cross the broken Garmon Mines bridge for your first time.

Bo is an apprentice carpenter working under Dale. He's young, but hard working and very kind. He is often seen with Luke, his best friend and fellow apprentice. He will often be seen apologizing for Luke's behavior though[1], and is the more level headed of the two. He lives at the shop with Dale and Luke, and can often be found in the shop hard at work or outside of the shop.

He has a minor role in the storyline, when you meet him for your first time. You will meet Bo at the beginning of the game when he's trying to fix the bridge to the Garmon Mines District. When you've brought him the items he needs, he will fix the bridge. This allows you to access the area from this point on.

Later on, he will also fix the minecart for you that's located in the Mine District[2]. It serves as a handy shortcut between Harmonica Town and the Mining District. 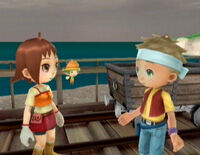 This request event can start after you've chimed the Red Bell. Talk to Bo when he's standing beside the minecart, located just outside of the mines.[4] Bo explains that this cart serves as a shortcut to Harmonica Town, but it's not working! He'd like to work on fixing it, but he keeps getting so hungry while working! Bo will ask you to bring him food so he can work on fixing the cart.

Bring Bo something to eat for the next few days. Give him the food when he is by the mine cart after 8:00 am and you'll help him find the energy he needs to fix the cart. It can be something simple - like mushrooms, but you must give Bo the food item. In a couple of days, Bo will have the cart fixed.

The cart goes from the Garmon Mines District to the Celesta Church Plaza in Harmonica Town. It can be used as many times in a day as you want, and it will never break. You can enter the cart from either end and it will take you both and forth between the two points.[5]

To view this event, you must befriend Gill, Bo and Luke all up to 3 hearts or more. Walk into Town Hall in between 8AM and 5PM on a day that it's open.[6]

Luke and Bo have come to listen to Gill's order. Gill wants one of his tables fixed, and hopes that the carpenters can help him. Gill insists that he would like a normal table. Luke, however, has different plans! He wants to make an extreme table, plain is boring! Gill is frustrated that Luke is so fixated on his own thoughts. Bo steps in to diffuse the situation and says that he will try and talk some sense into Luke, before Gill gets too mad!

Retrieved from "https://harvestmoon.fandom.com/wiki/Bo_(AP)?oldid=86991"
Community content is available under CC-BY-SA unless otherwise noted.