A Chicken is a type of animal in Harvest Moon: Back To Nature.

Chickens can be purchased from Lillia, at the Poultry Farm, for 1,500G each. A fully-grown, healthy Chicken is capable of producing one Egg per day.

Chickens can be a good source of income, especially with the Mayonnaise Maker. They are a good starter animal that require less maintenance compared to cows or sheep.

If a Chicken wins the Chicken Festival competition, it will always produce Golden eggs.

There are two developmental stages of a Chicken: the chick and the Chicken.

Placing an Egg in incubator results in a hatched chick after 3 days. Chicks do not need to be fed and are unable to produce Eggs. A chick's affection can not be raised in any way.

It takes 9 full days for a chick to grow into a Chicken.[1]

Chickens must be fed every day in order to increase their affection level and keep them healthy. As long as they are fed every day, Chickens will produce Eggs on a daily basis. The level of affection determines the quality of the Egg. A Chicken that wins the Chicken Festival will begin producing Golden eggs the following day.

Chickens initially start at 10 affection, with a maximum of 255 (each Heart represents 25 affection). Affection is based solely on feeding, and can only be increased by +10 per day. It takes a minimum of 24 days for a Chicken to reach maximum affection (1 Heart every 2-3 days). Affection determines the quality of an Egg that a Chicken produces.

Below is a list of activities that increase and decrease a Chicken's affection level:[2] 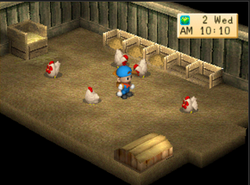 Chicks and Chickens will live inside of the Chicken Coop on your property. Inside the Chicken coop, time will be stopped, allowing the player to feed chickens and collect produce without time passing.

Chicks and Chickens both require Chicken feed for food. Each Chicken will have it's own feed box where Chicken feed can be placed. They need to be fed once a day. On sunny days, Chickens can be brought outside to roam freely on the farm. The Chickens will pull worms out of the ground for food instead of having to eat Chicken feed.

Chickens can be placed outside during sunny days, but should be brought inside at night so that they are not attacked by wild dogs. During bad weather, Chickens should always be kept inside the Hen house.

Sick Chickens will die if they are not cured. Illness does not spread to other Chickens, so there is no worry of contamination from one Chicken to the next. After a Chicken has been cured, it will take several days before it will start producing Eggs again.

Chickens eat Chicken feed. This can be bought from Lillia for 10G per unit (automatically added to feeder in Chicken Coop) or player-created by placing Corn into the Water Mill next to the Hen house. 1 Corn will produce 10 units of Chicken feed.

On sunny days, Chickens can be picked up and brought outside to roam freely on the farm. The Chickens will pull worms out of the ground for food instead of having to eat Chicken feed.

Healthy adult Chickens will produce one Egg on a daily basis. A Chicken that has won the Chicken Festival competition will produce Golden eggs. Eggs can be cooked, put into an incubator, shipped or given as a gift.

Egg quality is determined by the Chicken's level of affection.

With an upgraded Chicken Coop, Saibara will sell the Mayonnaise Maker at the Blacksmith. It costs 20,000G and one Adamantite ore (found in the Winter Mine), and will take 5 days to build.

Retrieved from "https://harvestmoon.fandom.com/wiki/Chicken_(BTN)?oldid=140334"
Community content is available under CC-BY-SA unless otherwise noted.