Not befriending him or after marrying Ann when he has max friendship.

Cliff is a character in Harvest Moon 64.

Cliff arrives on the 18th of Spring, starving and practically unconscious in front of your house. Giving him something to eat will earn friendship points with him. Afterwards, he'll live in the cave behind the carpenters shop and survive off the land. He doesn't have a job or much of a story to tell, but he mentions he likes to wander with his hawk Cain. If you befriend him and speak to him at the bar, he will mention that he has trust issues, implying that this is due to some harsh betrayal he experienced at some point in the past.

Cliff is a generally quiet guy who loves animals. He enjoys fishing and sometimes shares his catch with you if you're friends with him. He will give you the Spice Tea recipe if you give him milk or an egg in Winter. Cliff visits the Green Ranch a lot to watch the horses, and loves animals.

Cliff is your rival for Ann. Cliff will eventually marry Ann if he stays and you don't marry her. He will then live at the Green Ranch and have a child with her. If Cliff marries Ann, their child will be dressed in a dinosaur outfit.

Note: Once married, Cliff can be found at the Green Ranch most of the time. 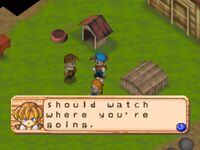 One morning, Cliff will visit and share fish with you. When he leaves he'll bump into Ann (literally). 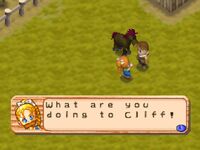 Cliff will visit the Green Ranch to pet Cliffguard. Ann gets mad and yells at him, and Cliff notes that she has a fierce temper. 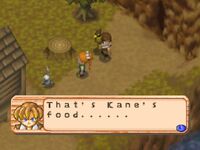 Cliff and Ann will argue near the Carpenters' house about letting Cain, Cliff's pet hawk, eat a rabbit. Ann thinks it's cruel, but Cliff says it's nature's way. Although Cliff is insistent that it is Cain's natural instinct to eat smaller prey to survive, Ann lets the rabbit go. 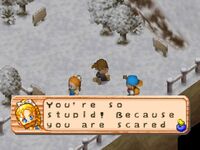 Cliff will tell you he's leaving because he's afraid of being betrayed. Ann storms over from the Green Ranch and calls Cliff a coward, pushing him away.

If you enter your farm any day from Spring 18 forward, you may run into Cliff. He's wandered on to your farm, hungry. If you give Cliff something to eat, he will automatically gain 5 affection points.[1] Regardless of if you feed him or not, he will now be a permanent villager in the game.

Retrieved from "https://harvestmoon.fandom.com/wiki/Cliff_(HM64)?oldid=138323"
Community content is available under CC-BY-SA unless otherwise noted.