A Cow is a type of animal and livestock in Harvest Moon: Back To Nature.

Cows can be purchased from Barley at Yodel Ranch for 6,000g, and will automatically be sent to your barn. When a Cow has matured into a Large Cow, it will produce milk daily.

A Cow that has won the Cow Festival competition will always produce Gold milk (Milk G). A Cow will win the competition with an affection level of 9 Hearts or greater. 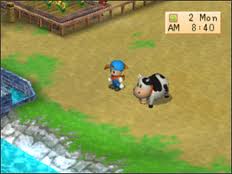 A Calf is a baby Cow. They are not able to produce milk. Calfs can only be obtained by impregnating an adult Cow with a miracle potion. After a calf is born, it will take 15 days for a calf to grow into a Young Cow.

A Young Cow is a Cow that has not fully grown. Cows purchased from Barley are always Young Cows. With proper love and care, a Young Cow will mature into a Large Cow. It takes 14 days for a Young Cow to grow into an adult Large Cow.

A Large Cow is an adult, capable of producing milk every day. Cows will only produce milk if they are in a good mood, are healthy and are not pregnant. The more affection that a Cow has, the better quality milk that they will produce. Large Cows are also capable of entering the Cow Festival. Winning Cows are capable of producing Gold milk (Milk G).

Healthy adult Cows can be impregnated using a Cow miracle potion, which can be purchased from Yodel Ranch for 3,000g. When a Cow becomes pregnant, she will no longer produce milk, and is not eligible to compete in the Cow Festival, until after the birth of her calf. Pregnant Cows require the same level of care as normal. A calf will be born in 21 days.[1]

It may be more productive, albeit more expensive, to buy Cows from Yodel Ranch, rather than waiting for almost two full seasons for a Cow to grow up naturally (impregnation, Calf stage, Young Cow stage, etc).[2]

Cows initially start at 10 affection, with a maximum of 255 (each Heart represents 25 affection). Affection can only be increased +4-5 per day, by talking to the Cow and feeding it (brushing or milking does not increase affection.[3]). It takes a miniumum of 48 days for a Sheep to reach the maximum of 10 hearts. Affection determines the size of Milk that a Cow produces.

Below is a list of activities that increase and decrease a Cow's affection level:[4] 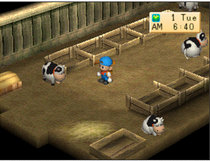 After buying a Cow, they will live in your barn. Like the other houses and buildings, time will stop so you can do many things here without having time pass such as milking and feeding.

Cows are purchased from Barley as Young Cows, and require 14 full days to develop into an adult Cow that can produce milk. In order to keep Cows happy, they require careful attention. Cows eat fodder while inside the barn, and can eat grass outside during sunny weather instead of fodder. Cows can be brushed, milked and talked to each day. Failing to feed a Cow will result in the Cow not being able to give milk for at least two days.[5]

If Cows are not fed or left outside in bad weather, they will get sick. Sick animals require animal medicine. If a Cow is not treated with animal medicine, it will eventually die from it's illness.

Cows eat Fodder, which can either be bought from Barley at Yodel Ranch for 20G per unit or player-created by cutting Grass. Either way, Fodder is always automatically added to the silo. One cut Grass will produce 1 unit of Fodder.

If Grass has been grown on the farm, Cows can be led outside (using the Bell), during sunny weather, to eat Grass instead feeding them Fodder in the barn.

An adult Cow is capable of producing Milk once a day. The quality of the Milk is determined by the Cow's affection level. A Cow that has won the Cow Festival competition will always produce Gold milk (Milk G).

With an upgraded Barn, Saibara will sell the Cheese Maker at the Blacksmith. It costs 20,000G and one Adamantite ore. The Cheese Maker can convert Milk into Cheese. Cheese is more profitable than Milk.

Retrieved from "https://harvestmoon.fandom.com/wiki/Cow_(BTN)?oldid=128226"
Community content is available under CC-BY-SA unless otherwise noted.