Throughout the areas around Zephyr Town you'll find a variety of insects flying and crawling around. They aren't just for looking at; you can catch the bugs and sell them or give them as gifts! The only equipment you need for catching bugs are your hands. You don't need a net or any other type of equipment.

There are 6 categories of insects and 1 frog category. Each family of insects has 3 additional groups. The harder the insect is to catch, the more money you can earn from it if you sell it. The frogs are the only family that doesn't split into 3 levels of difficulty; frogs are always pretty easy to catch.

You will only find insects on Your Farm, the Waterfall Area, Zephyr Town, and the Hotel area. There aren't any insects in the Horse Track or the bazaar grounds. When you are hunting for insects, the insects will reset on the hour when you enter an area. For example, if you are trying to catch an Emperor Firefly on your farm and you don't find one at 11:15 pm, go back out to the Waterfall area, wait until midnight, then go back to your farm and look again. If you still don't find one, go back to the Waterfall area and enter your farm again after 1pm. At each hour mark (:00), the bugs will reset.

If you are going to sell the insect, you will earn more for hard to catch insects in gold bug cages compared to bugs in silver bug cages or green bug cages. Bugs do not "rot" so they do not have a freshness rating but they do have a star ranking. You can store as many bugs as you want and they'll never go bad or lose star rank.

A list of all of the bugs and frogs you catch can be found in the bookcase inside your house.

These insects are found on tree trunks during the summer season. To catch them, you want to stand in front of the tree but some distance back. Then press A to jump (no double jump required) and press B to catch the cicada. Make sure you are in "walk" mode when you are positioning yourself in front of the tree. If you are running, the cicada will fly away.

The most profitable cicada are the Chattering Cicada (360 G @ 2.5 stars) and the Bear Cicada (570 G @ 2.5 stars), as long as you are selling the insects at the bazaar. If you are going to sell insects to Raul at the store in Zephyr Town, you will only earn half as much. 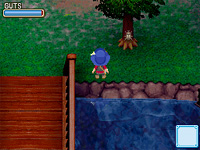 These night time bugs are a favorite of Dirk. If you're befriending him, stock up on these bugs because they're only available during the summer season. The technique to catch beetles is the same as the cicadas; stand near the tree, press A to jump towards it, and spam your B button until you've either caught the bug or you missed and it flew away.

Dragonflies, Damselflies, and Skimmers come out during the Fall and Winter seasons. These bugs fly around in the air and move rather quick; the red colored ones move slower than the blue ones, and the yellow ones move the fastest! To catch the speedy flying insects, you have to jump around in their flight path, pressing the B button over and over. Often you'll have to double-jump to get high enough in the air to catch them.

If you catch a dragonfly mid-air but over a patch of water, you'll fall in the water and your bug will go free. 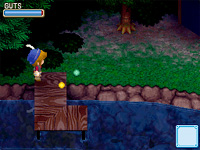 These summertime bugs are easy to catch. You can see where they are by simply watching the ground. The fireflies will brightly glow and all you have to do is walk over and pick them up. If you run too close to a firefly, it will fly away. Super easy! 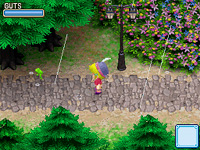 Frogs only come out when it is raining in spring, summer, and fall. They do not move very quickly and are easy to pick up. You just have to look for the hopping green things on the ground, then pick them up using the B button.

Since they're so easy, frogs really do not sell for very much money. The most profitable frog is the Spotted Pond Frog (140 G @ 2.5 stars).

The blue butterflies are very difficult to catch. You only have a short period of time to catch them before they will fly away. Sometimes you may find them flying away even before you can get close enough to get them! If you are looking for a specific blue butterfly, make sure you are always running and get to the location where the butterfly can be found before it flies away.

Butterflies can be profitable if you can catch them and you're willing to wait. The Oki Butterfly (280 G @ 2.5 stars) and Helena Morpho (570 G @ 2.5 stars) can't be located until you've reached your second year in the game. 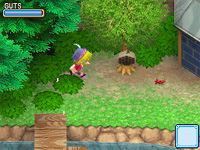 Unlike all of the other insect families, grasshoppers can be found all year round. They will stay hidden until you run over their hiding spot, when they'll jump out for you to chase and catch. Green grasshoppers move slower than the red grasshoppers. If you run off-screen and out of sight of the bug before you can catch it, the hopper will disappear. You just have to chase it and press the B button over and over until you catch up to it.

Retrieved from "https://harvestmoon.fandom.com/wiki/Critters_(GrB)?oldid=128874"
Community content is available under CC-BY-SA unless otherwise noted.