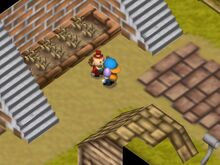 The Egg Festival is a festival in Harvest Moon 64. It is held on the 20th of Fall.

There are boxes that hold a certain colored egg scattered throughout the village. Tapping the A button at one of these boxes allows the player to pull out the egg. If it's the correct color, the player must bring it back to the Mayor. If it is not correct, tapping A again will cause the egg to disappear so the player can look in another box for the right one. Every time a round ends (either by bringing the right egg or time running out), the boxes will hold a different colored egg (example: a box that once held a blue egg will most likely not have a blue egg again).

It is overall an easy game to win. The player only needs to win three out of the five rounds. The first time the player wins, they will receive a Power Berry. If they win again the next year, the prize will be a turtle figurine that is placed on top of the player's TV in their house. All other wins afterwards will be a couple hundred pieces of lumber.

Retrieved from "https://harvestmoon.fandom.com/wiki/Egg_Festival_(HM64)?oldid=127284"
Community content is available under CC-BY-SA unless otherwise noted.