"Runs the hotel. Treats Daisy as if she were her own granddaughter."
―In Game Description

Ethel and her husband Stuart own and run the Zephyr hotel together. She is usually found behind the counter, or in her room early in the morning. Their maid Daisy is like a granddaughter to the elderly couple.

Ethel and Stuart have an adult son who has moved away from Zephyr Town. He doesn't come back to visit often which often makes both Ethel and Stuart sad, although having Daisy around helps lift their spirits. The couple has lived in Zephyr Town their whole lives, and Ethel is close friends with Joan.

Stuart and Ethel will also give you the Blue Feather required for marriage for free! The couple will stop by your house after you get a marriage candidate to an orange heart and you are in your second year or later. 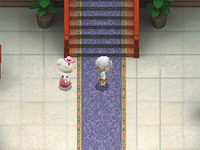 Walk into the hotel between 10am and 12pm on a Monday, Tuesday, Thursday or Friday. This event cannot be triggered in Fall and it cannot be raining.

You see Amir trying to leave the hotel as he is stopped by Stuart. Stuarts asks Amir to help him get an item off of a high shelf and Amir agrees to help him. Afterwards, Amir is once again stopped, this time by Ethel. She asks Amir to help her carry in her heavy groceries, and again, Amir helps her with the task.

Amir is stopped a third time, this time by Daisy. She's having a problem with money from the cash registers not adding up. Daisy talks him into looking into the problem for her.

A Way With Women

On a sunny Monday, Tuesday or Wednesday go to the cafe in between 10am and noon. Angelo must be at 40,000FP (5 hearts) or more. 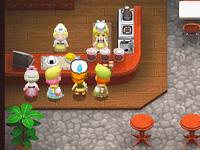 This event takes place at the hotel in between 1pm and 4pm on a Saturday or Sunday. Stuart, Daisy and Ethel all need to be at 30,000FP (4 hearts) or more. Additionally, Daisy cannot be married. 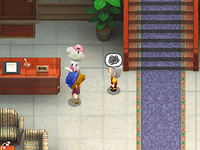 As you walk into the hotel, you see Stuart who is deep in thought. He excuses himself to go and get something to eat, leaving you at the front desk by yourself. Ethel walks out of the back room after Stuart leaves. She explains that Stuart gets like this often, especially when he thinks about their adult son who doesn't visit them very often. Both Ethel and Stuart miss their son very much, but with Daisy around the hotel, they do feel a little bit happier.

As Stuart comes back into the room, Daisy comes in from outside. She excitedly shows Stuart a tasty dessert that Angelo gave her. She wanted to show Stuart since its one of his favorite foods. This seems to cheer Stuart up. 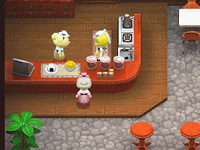 Walk into the cafe in between 10am and noon on a Monday, Tuesday or Wednesday during sunny weather. Joan must be at 40,000FP (5 hearts) or more.

Ethel walks into the cafe to find Joan and Marian inside. Marian was just going outside to sweep and excuses herself, leaving the two older women to talk. Ethel compliments Joan on how beautiful her granddaughter has become. Joan seems to be proud of Marian and comments that it is a nice feeling to have her living in Zephyr Town.

This saddens Ethel slightly who misses her own son. She wishes he would move back to Zephyr Town as well. Ethel decides to leave as Marian comes back in.

Retrieved from "https://harvestmoon.fandom.com/wiki/Ethel_(GrB)?oldid=125294"
Community content is available under CC-BY-SA unless otherwise noted.