Gray is a character in Harvest Moon: Friends of Mineral Town.

Gray is a rather angry young man who's come from the city to live in Mineral Town. He works as an apprentice blacksmith under his grandfather, Saibara. He may seem rude, but it stems from his frustration of working under Saibara, who has high expectations of Gray. He is often misunderstood, but he actually has a very sweet side if you get to know him.

When Gray is not at the Blacksmith's, he can be found at his room at Doug's Inn. When Mary comes by the Blacksmith's, Gray will be smitten by her, and from then on will be your rival in the female version, where Gray is an eligible bachelor.

Gray will never return to the city, and will continue to work hard to gain his grandfather's approval.

Requirements: Gray is at a black heart.

Go into the Blacksmith's on a Sunday, Tuesday, Friday or Saturday between 10am and 1pm.[4] Gray and Saibara will be arguing, and you have unfortunately walked into the middle of it. Gray is standoffish from the argument, but Saibara politely greets you.

Gray feels that Saibara doesn't appreciate him, and he feels like giving up. Tell Gray to keep practicing, and he vows to keep trying to impress Saibara.

Requirements: Gray is at a purple heart, and you've seen the black heart event.

Thus event will take place at Doug's Inn on the second floor where Gray stays. Go there on a Sunday, Tuesday, Thursday or Saturday been 5pm and 8pm.[5] Gray will apologize for his behavior earlier (when you triggered the black heart event), and will then quickly change the subject to his work.

If you encourage him, he is happy and says he will try to make you something out of some gemstones.

Requirements: Gray is at a blue heart, and you've seen the previous two events. Additionally, you must have an empty slot available in your rucksack and have the biggest rucksack available.

Walk out of your house on a Monday between 6am and 12pm to see this event.[6] Gray will ask if you like jewelry. If you respond positively, Gray will surprise you with a brooch he made! Saibara doesn't know about it, of course, and Gray appears to be getting much better at smithing.

Requirements: Gray's at a yellow heart, and all other events have been witnessed.

The last event can be seen if you go to the Blacksmith's on a Monday between 10am and 1pm.[7] Saibara will see that you've stopped by, and comments that he's glad you've become friends with his grandson. Gray seems preoccupied with something though, so Saibara feels it's good to let Gray go spend time with you today. Gray is surprised that his grandfather allows this, but is happy.

You'll be transported to the Inn. Gray will ask if you're staying in town for a long time. If you reply that you are, he will comment that he'd be sad if you left. 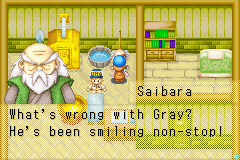 Requirements: Go to the Blacksmith's on any day of the week (except for Monday) between 10am and 1pm.[8]

While Gray and Saibara are working, Mary stops by to thank Saibara for a tool he had made for her father. Gray hurts himself while working and starts bleeding. Mary tends to his injuries.

Requirements: Go to the Library on any day of the week (except for Monday) in between 1pm and 4pm.[9]

Mary and Gray have a conversation about the Library. Mary will then ask Gray if he'd like to read a novel that she's been writing. Gray says he'd love to.

Requirements: You must wait until Year 2 or later to see this event, after seeing all of the previous events.

On a Sunday, Tuesday, or Friday go to Mother's Hill in between 7am and 10am.[10] It must also be a sunny day. Gray has been reading Mary's book, and compliments her on how good it is. Gray is a little jealous that Mary is so good at writing, because he feels he's not a good enough blacksmith. No matter how hard he tries, he just can't seem to get any better.

Mary pushes Gray to keep going. If Gray loves being a blacksmith, he'll get better automatically!

Requirements: You must wait until Year 4 or later to see the last rival event, after witnessing the previous events.

Go to the Library between 1pm and 4pm on a Thursday or Saturday.[11] Gray tells Mary that he's excited that Saibara is letting him do some real work around the store, even if it is just little jobs. He thanks Mary for all of her encouraging words, if it wasn't for her, he would have given up on being a blacksmith long ago! Gray lets Mary know that he's looking forward to a blacksmith exam he's going to be taking. If he passes, he has a question he'd like to ask Mary. He won't tell her what it is... yet.

7 days after witnessing this event, Gray and Mary will get married.

A season after you and your spouse are married, your wife (or you, if you are playing MFoMT) will not be feeling well one morning. You will go to the clinic, and the Doctor will announce that your wife/you are pregnant.[12]

Your wife/you will give birth in 60 days, and you will have a baby. For the first 60 days, it will be sleeping in the bed and you cannot interact with him or her, but after those 60 days, your baby will grow into a toddler, and you can talk and give gifts to him or her.[13]

During the summer season, visit Kai's Snack Shack in between 11am and 1pm.[14]

When you walk in, you see Gray ordering some food from Kai. As Gray sits down to eat, Kai notices that you've come in and greets you. Gray compliments Kai by saying that Kai has the best food in town. Kai is a little embarrassed, but laughs at his compliment. Gray leaves to go back to the Blacksmith's and says goodbye to you and Kai.

The event starts when your character walks into Kai's restaurant between 5-7pm.[15] Triggering the event will cause the day to end.

After all the customers have been served, your character, Kai, and Popuri are alone in his restaurant. Kai is tired after working so hard. He tells Popuri that he's grateful for the customers, but she brought too many! Popuri apologizes for overdoing it and Kai admits that he might be glad that he has such few customers. He thanks your character and you go home.

After Mary and Gray have gotten married, you can see this event by visiting Mother's Hill between 1pm and 4pm on a Thursday.[16]

Mary and Gray are speaking about a book that Mary's written. She's excited because the publisher wants her to write a sequel! Although Gray is happy for her, he is also concerned. Mary spent a lot of time working on her first book, and Gray is worried that she might work herself too hard writing the next book.

Mary is happy that Gray is so concerned about her and promises that she'll try to pace herself while working on the next book.

A Prize for Basil

To see this event, Mary and Gray must be married. Visit Mary's home between 5:30pm and 7pm on a Thursday evening.[17]

Mary, Gray, Basil and Anna can be found gathered inside. Mary sees you come in and explains that they are celebrating an award that Basil won for a book that he's wrote! Basil doesn't seem to think that it's a big deal, but he thanks everybody for their kind words.