Gray is a character in Harvest Moon 64.

He is a quiet person who lives at the Green Ranch. He is Ann's brother, and according to his sister he is "a social disaster", although a "good guy". Rick reveals that Gray was once the jockey for his family's horse, Cliffgard, until an accident left him unable to ride. The accident caused the already quiet Gray to "become silent". He will be very cold towards you initially, but befriending him will help him open up.

His other family members include his father, Doug, who runs Green Ranch, and his cousin Rick, who runs the Tool Shop. If you give Gray an egg, he will give you the recipe for Stuffed Omelet.

Gray is your rival for Popuri's affection, and will plant flowers at Green Ranch in an effort to woo her. If you allow them to marry, Popuri will move onto the Green Ranch. Gray and Popuri will have a daughter named Mint, dressed in a pink bunny outfit. 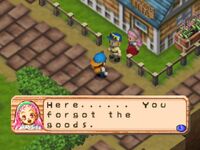 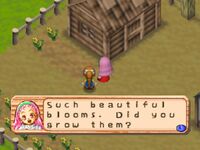 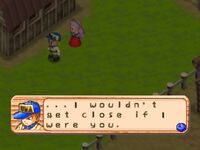 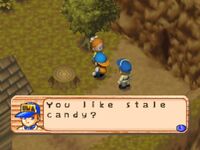 Requirements: None, but more likely to occur if Ann is at a blue "friendly" heart or higher.

Retrieved from "https://harvestmoon.fandom.com/wiki/Gray_(HM64)?oldid=132814"
Community content is available under CC-BY-SA unless otherwise noted.