Harris is a character in Harvest Moon 64.

Harris serves as the local mailman for Flowerbud Village and is a good natured man. He can be found in numerous place throughout the area and talks about the weather often. He works every day except for Sunday and is one of the only people who will go out regardless of the weather or time of day.

Harris also mentions that he was helped by the Mayor of Flowerbud Village and feels indebted to him. Harris serves as the rival for Maria and he often visits her at the local library when he is off duty. If the player doesn't marry Maria and becomes good friends with the two of them, they will get married and eventually have a child. Afterwards, he will live with Maria's family.

He competes in the swimming and egg festivals. If the player give Harris a potato, he gives the Garlic Potato Beef recipe in return. 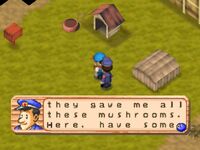 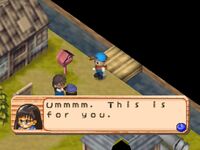 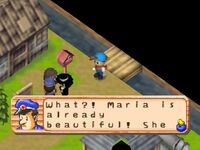 Retrieved from "https://harvestmoon.fandom.com/wiki/Harris_(HM64)?oldid=138330"
Community content is available under CC-BY-SA unless otherwise noted.