The purely female perspective affects the story, although Marvelous Interactive Inc. tweaked and updated some parts of the gameplay, and added several new items in this game. It is the second game that focuses on the female perspective since Bokujō Monogatari: Harvest Moon for Girl.

The main character is a young woman from the city who inherits a somewhat run-down farm in Forget-Me-Not-Valley after the death of her father, and tries to make it successful with some help from her father's old friend, Takakura.

Each chapter is one year long (which is four seasons with ten days each in Harvest Moon time) and narrated by Takakura. The chapters all show how the character takes care of her farm, befriends others, and courts men according to how the player controls the character.

Another Wonderful Life's gameplay is very similar to its predecessors, involving growing crops while taking care of the variety of animals inhabiting the farm.

The game also includes the ability to court three bachelors and marry one of them by the end of the first chapter of the story. The game progresses through 6 chapters in the game, which shows the player character going from young adulthood to old age.

Starting from the second chapter, the player character will have given birth to a son, who will grow older and the player will have to take care of him for the rest of the story. NPCs also grow older or move as time passes.

The player can propose marriage by offering one of the boy's a blue feather, although he will only accept it after the player has convinced him to fall in love with the main character. If the main character is not engaged by the end of the first in-game year, either Rock, Gustafa or Marlin will spontaneously propose, depending on who has developed the most affection. If the player does not want to marry, the game will automatically end at the end of the first year.

If the main character does marry at the end of the first year, the game continues to follow her married life. But sometimes if you fail in your married life, you will divorce (or split up) with your husband and the game ends. 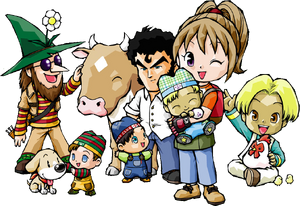 This is the second Harvest Moon game in which the you can raise the child to adulthood. Rock's son, Marlin's son and Gustafa's son each have unique and have their own set of interests and talents. However, the player can influence the child's developing personality by taking him places, introducing him to people, and giving him gifts related to various fields. At the end of the game, your son who all grown up will choose one of six possible careers.

If the player connects a Game Boy Advance with Harvest Moon: More Friends of Mineral Town to the Gamecube while playing Another Wonderful Life, the two games can exchange information. Initiating the connection requires going to the mountain path next to the vegetable farm where Celia lives in Another Wonderful Life, and throwing an offering into the Harvest Goddess' pond in More Friends of Mineral Town. NPCs in Forget-Me-Not Valley will begin to make comments about events in Mineral Town, and vice versa. In addition, some NPCs will make periodic trips to Mineral Town, returning with new items to sell or hints for the player.

Even without connecting the games, the Harvest Sprites in Another Wonderful Life occasionally visit players in More Friends of Mineral Town.

Retrieved from "https://harvestmoon.fandom.com/wiki/Harvest_Moon:_Another_Wonderful_Life?oldid=124619"
Community content is available under CC-BY-SA unless otherwise noted.