watch 02:45
Wiki Targeted (Games)
Do you like this video?
Play Sound

The game's story, protagonist, setting and characters are all similar to Harvest Moon: Save the Homeland for PlayStation2. Hero of Leaf Valley can be viewed as an enhanced version of Save the Homeland with better graphics, more features, and the marriage system brought back.

Leaf Valley is in trouble! The heartless Funland corporation is going to bulldoze the town and replace it with an amusement park unless its citizens can find a way to stop them. Players will need to grow crops, raise animals, and mine ores and gems to help save Leaf Valley and their family farm. Along the way, they'll earn money and develop their skills in interactive part-time jobs, and build their relationships with the villagers in order to gain their trust and help. With an open-ended story with multiple endings, how players choose to save the town is up to them! 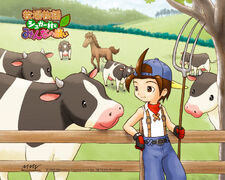 In this game, we are introduced once more to an environment where we are familiar with. Leaf Valley is home to many rare animal species now at great risk of being extinct. It is highly likable to start your ranching skills in Leaf Valley as there are a varied amount of animals you can start with to improve your ranching abilities. The place is also abundantly rich in more green, luscious trees greatly viewed during Springtime of the year. The villagers living in this place are quite friendly and very welcoming. They can be hospitable at times and are very approachable. A few of the villagers even offer you some part-time jobs where you can hone your farming skills or make some easy cash. These are the very reasons why living in Leaf Valley is worth saving!

Marriage can only be done once you have saved Leaf Valley, meaning you can only marry during the third year. Unlike other Harvest Moon games, you cannot have a child. In order to get married, you must complete the following requirements:

There are sixteen different ways to save Leaf Valley. Besides saving 50,000 G to purchase Leaf Valley back from Funland Company, you can transform it into a Nature Preserve to protect rare and endangered animals, or a desirable Tourist Destination. The first story quest is the main, having you interact with Funland Company's CEO Alice (and also opening the option of having her stay in Leaf Valley or not). The other fifteen involve the townsfolk and are divided between 'Nature Preserve' and 'Tourist Destination'. Each involve a different, specific character, although more than one character is usually involved in the sequence of event for any character.

Retrieved from "https://harvestmoon.fandom.com/wiki/Harvest_Moon:_Hero_of_Leaf_Valley?oldid=156146"
Community content is available under CC-BY-SA unless otherwise noted.