View source
watch 02:19
Wiki Targeted (Games)
Do you like this video?
Play Sound

It is the third game that focuses on the female perspective (the other examples being Bokujō Monogatari: Harvest Moon for Girl & Harvest Moon: Another Wonderful Life). It is one of the very few Harvest Moon titles to have a cancelled release in PAL regions.

This game follows the pattern of a lot of Harvest Moon games - planting crops and raising animals. You may also befriend the numerous villagers of Mineral Town, and there are lots of optional events to view as well as many festivals to attend There is a choice of eight bachelors (five regular and three secret bachelors) to marry.

The player is sitting alone in her apartment, thinking about how tired she is of her life in the city. She wants something new, and as she's looking in the newspaper, she sees an advertisement in the newspaper about a farm for sale.

She decides to purchase the farm, and goes there to see it. Upon arriving, she meets with the mayor, Thomas who is surprised to see that somebody has replied to the advertisement. Although the farm needs a lot of work, Thomas says that the people of Mineral Town are desperate for a person to revive the farm. The player decides to live on the farm, and the game then begins.

The main goals of the game are simple: 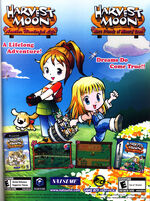 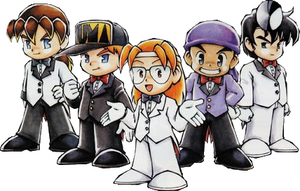 Gourmet, Kappa, and Won are all special bachelors. However, the Gourmet and Kappa will not live with the player, similar to the Harvest Goddess.

Like the previous game, you may request your spouse to be a stay-at-home one, however, you will not have that option with Won. If Kai is married, he will live in Mineral Town permanently. You may also have a child 90 days after marriage if you've kept your husband at a high love level.

There is a rival for each of the five regular candidates. The three special bachelors Gourmet, Kappa and Won do not have rivals.

Connecting to Other Games

The game offers connectivity with the Nintendo Gamecube game Harvest Moon: Another Wonderful Life. To connect with the Gamecube game, the player must throw an offering (virtually any throwable item) into the Harvest Goddess's pool in More Friends of Mineral Town. When connected, entries will be added to the library with details about the characters in A Wonderful Life. Also, certain characters will talk about the characters in Forget-Me-Not Valley. If the player connects enough, she will obtain the seaside cottage, the ultimate reward for connecting.

Unlike past Game Boy versions of Harvest Moon (and even Harvest Moon: Back To Nature), Friends of Mineral Town does not feature the ability to trade livestock with other FoMT game cartridges.