A (All Ages) Japan
E (Everyone) North America

Hundreds of years ago, the towns of Bluebell and Konohana were friendly neighbors, joined together by a tunnel underneath the mountain that separated the towns.

The mayor of Bluebell began fighting with Konohana's mayor as time went on. Each mayor claimed that their town was better, and it created more and more tension between the two towns. As the mayors continued to fight, the Harvest Goddess grew more and more restless.

When the fighting didn't stop, the Harvest Goddess punished the two towns by blocking the tunnel that once connected them. Generations have passed, the town's have very little interaction now, but still remain bitter to one another.

As a new farmer, you are eager to begin your new life on a new farm. While travelling on the mountain, you fall off of your carriage after nearly colliding with foxes, and you forget which town you were supposed to live in! Rutger, mayor of Bluebell, and Ina, mayor of Konohana, will each tell you a bit about their own, and it will then be up to you as the player to decide which town you like best. After picking a town, you will begin your new life there, and attempt to mend the relationship between the two towns.

Male Protagonist
Add a photo to this gallery

The game's main purpose is to win the cooking competitions that happen four days out of each season. This is when each town will come together and compete. By competing in each competition, it will slowly increase the friendship between the two mayors. By increasing their friendship, the Harvest Goddess will eventually decide to unblock the tunnel that is blocking the two towns.

Although the game's main purpose is to cook dishes for the cooking festival, the game has many of the classic Harvest Moon elements to it as well. The player will have a choice between a female (Lillian) or male character (Phillip), and will also have a choice of which town they'd like to live in. The player will then be introduced to their farm.

The player can grow crops on their farm, raise livestock, forage, fish, catch bugs, and do requests to make money. Relationships are also a very key part of the game. Interacting between NPC's is important in order to build friendships, and to also build the flower level of the person you'd like to eventually marry and have a child with. 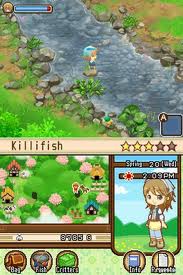 There are only a few differences between the Nintendo DS version and the 3DS version. the 3DS version has 3D capability, while the DS version does not. The graphic quality is better on the 3DS because of it's enhanced screen. The 3DS' screen is also wider, so you get to get a wider view of the area.

Another difference is that the DS version is not region locked while the 3DS version is. The 3DS version also has a street pass feature. With this game's street pass, you can put items in your 'Street Pass Box' and trade items with people you pass by. The last feature is that unique to the 3DS version, is that it has an extra petting minigame, like the ones Island of Happiness, and Sunshine Islands that make it easier to max out your animals' hearts. Otherwise, the two games are completely identical. On a negative note, the 3DS version has some unexplainable framerate issues on larger farms.

As most games in the Harvest Moon series do, it has a cooking system.  You can choose to cook from a recipe or try to make something new.

There are a variety of different crops that the player can grow throughout the four seasons.

Among the old favorites like cows, and chickens there's some new options as well.  However, only cows and chickens are available in the beginning.

Retrieved from "https://harvestmoon.fandom.com/wiki/Harvest_Moon:_The_Tale_of_Two_Towns?oldid=79678"
Community content is available under CC-BY-SA unless otherwise noted.