watch 03:19
Wiki Targeted (Games)
Do you like this video?
Play Sound

Jeff (also called "The Bakery Master") is a character in Harvest Moon 64.

Jeff is Duke's nephew and runs the Flower Bud Bakery, where he works closely with Elli. He enjoys fishing and tea. If you befriend him he will tell you that Elli's grandfather took care of him and brought him to Flower Bud village 10 years ago. He also promised Elli's grandfather that he would see her get married one day. If you do not marry Elli, Jeff will instead.

If you give Jeff an egg or milk, he will give you the recipe for Cinnamon Milk Tea.

The One That Got Away 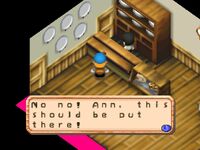 *Requirements: Elli and Ann's affection must both be at 150 or higher. Can only be triggered between the 15th and 30th of Fall on a day when the bakery is open.

Retrieved from "https://harvestmoon.fandom.com/wiki/Jeff_(HM64)?oldid=155395"
Community content is available under CC-BY-SA unless otherwise noted.