If you do not befriend him or if Karen moves away.

Kai is a character in Harvest Moon 64.

Originally from a poor town, Kai left his family (and five brothers) to come to Flowerbud Village and resides at the Vineyard where he works. Kai is a very hard working and kind person who tries his best to understand the troubles of the family he works for. While street smart, Kai mentions that he has some things to get used to since he is now living out in the country.

Kai is an excellent swimmer and will usually win the Swimming festival. True to his occupation, Kai is fond of wine and anything that can be used to make it. If you give Kai a veryberry, he will give you the recipe for Veryberry Wine.

Kai will be your competition should you choose to marry Karen, the daughter of The Vineyard Owner. He even states one of the reasons he stayed in Flowerbud was because of Karen. He often tries to console her when she is upset as well as help her to understand her father's feelings. If the two get married, they will live together at the vineyard and have a child together.

If you neither marry nor become friends with Karen, then she will eventually leave to the city and never return. If you are not good enough friends with him, Kai will also leave to follow her. 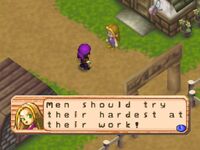 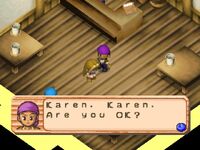 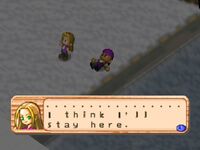 *Requirements: Karen has left Flowerbud Village, and Kai has less than 80 affection. Enter your farm to get the scene.

Retrieved from "https://harvestmoon.fandom.com/wiki/Kai_(HM64)?oldid=138333"
Community content is available under CC-BY-SA unless otherwise noted.