View source
watch 02:05
Wiki Targeted (Games)
Do you like this video?
Play Sound

A Fishy Story
The Azure Swallowtail

Kurt is a character in Harvest Moon: Save the Homeland.

He is an apprentice carpenter who works with his brother Joe at Woody's Carpentry under their boss, Woody. Kurt is a very quiet, shy and reserved individual but will become more talkative once befriended. He and his brother live together in a small shack behind the carpenter's.

He is rarely seen in other parts of the valley, and spends most of his time at the carpenter's. On his days off, he will often go walking in the valley and may be seen outside of Lyla's or near the villa. His favorite gifts are tomatoes and he dislikes sweets. 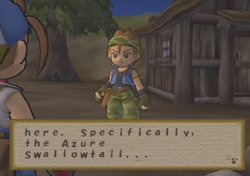 Start by befriending Kurt. When his friendship has increased enough, a cut scene will happen when your character visits the carpenter's. Kurt will talk to you about a rare butterfly called the Azure Swallowtail. It hasn't been seen in the valley for a long time, but Kurt would like to look for it. If the butterfly can be found around here, then maybe the valley will be able to thrive as a nature preserve.

Kurt says that Woody told him that the butterflies are only attracted to blue flowers which haven't been seen in the valley for a long time. The Harvest Goddess and Harvest Sprites show up, and the Harvest Goddess thinks it's a good idea to try and learn more about the flowers. She suggests finding somebody who knows a lot about flowers.

If you're not sure about who to speak with, you can go and speak to the Harvest Goddess for a hint.

Speak to Lyla and Parsley 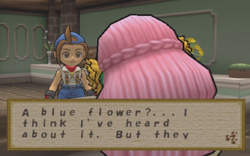 Go speak to Lyla at her flower shop. Lyla will explain that the only blue flower she's heard of is a very delicate flower and only grows high in the mountains. Other than that, however, she doesn't know much about it. She says that she'll try and find out more information for you.

Find Parsley and speak to him. If his friendship is high enough, he will tell you that he's interested in doing some research about this, and will get back to you with any findings.

If you're not able to speak with Lyla and Parsley, your friendship with them is most likely not high enough. Keep giving them gifts until you're able to find out information about the flower.

Updates from Lyla and Parsley 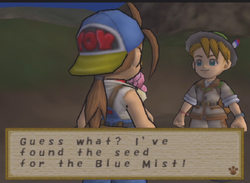 After speaking with Lyla and Parsley, they will come to your home in the morning in about a week's time if the weather is sunny. They've brought good news about the flower!

Lyla says that she and Parsley worked together to gather more information about the mysterious blue flower. Parsley says that he's heard about a rare flower called the Blue Mister Flower that only grows high in the mountains. Although he's not sure if the flower would grow in the valley, he's going to try and find the seeds anyways.

Parsley and Lyla will return again when they've found out more information.

After you get your first visit from Parsley and Lyla, stop by the tool shop to see a cut scene between Louis and Lyla. Louis has invented a camera so that he can take a photo of the Azure Swallowtail when it (hopefully) eventually shows up.

They both hope that the butterfly will show up. 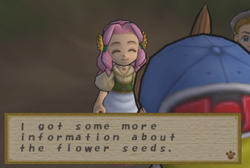 After you've spoken to both Lyla and Parsley about the Blue Mist flower seeds, they will both come and visit you again about a week after their first visit. This event will not trigger in rainy weather. Parsley will present you with a bag of Blue Mist Flower seeds and tell you how to care for them so that they will grow. After giving you the seeds, he leaves.

To plant the seeds, go to the Goddess' Lake. There is a single dirt plot that you can find by crossing the river, and this is where you want to plant the seeds. You must water this plant every day, and it will take about 9 days to grow to full term.

The flower will not be able to grow in the Fall, so make sure not to plant it too late into Summer! 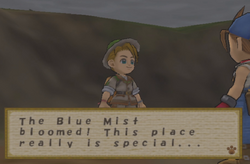 Once the flower is fully grown, visit the Goddess Pond to go and see it. When you arrive, Parsley will find you and congratulate you. He never thought that the flower would actually grow! He announces that he's leaving the valley to move on to bigger and better things. He thanks you for all that you've done and leaves.

You will not be able to see Parsley again until you finish the quest line and start a new playthrough. 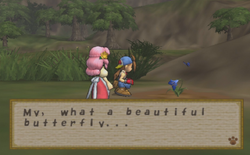 You'll see Lyla and Louis arrive to see the butterfly. Louis will snap a picture of Lyla and the butterfly just in time before it flies away. He tells you that he will send the photo in and wait to hear word back.

If you visit the Goddess Pond in the evening after 6PM before the butterfly shows, you'll see the Goddess and the Harvest Sprites admiring the flower.

The Valley Is Saved 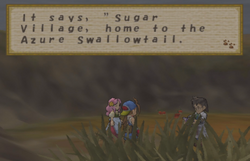 Wait about a week after the Azure Swallowtail was sighted. During this time, the Blue Mist Flower will die, but there is nothing that can be done it, and it will not negatively affect the event path.

Go to the Goddess Pond in the evening during nice weather for a cut scene where you will see Lyla picking the seeds from the flower. She explains that the seeds can be sold so that they more Blue Mist Flowers can be grown.

Louis arrives on the scene and happily announces that the valley is saved and will now be turned into a nature preserve due to the picture of the Azure Swallowtail being published.

Community content is available under CC-BY-SA unless otherwise noted.