"A merchant who often travels for business. A little standoffish."
―In Game Description

Lloyd (ロイド Roido, lit. Lloyd) is a character in Harvest Moon DS: Grand Bazaar. He is one of the eligible bachelors to court.

Lloyd was a former world traveler before he settled in Zephyr Town. He is slower to warm up to people than others, but he's not a bad guy. Lloyd doesn't have any family that appears in the game, but Felix and Sherry are very close to him. The two helped him when he came to Zephyr Town, and the house that Lloyd lives in is actually Felix's old home. In exchange for sharing stories of his travels, Felix allows Lloyd to live there for free.

Lloyd has his own stand at the bazaar where he sells minerals and gems. He is very passionate about giving back to Zephyr Town, and works hard every week to sell items.

Before you can propose to Lloyd, you have to have Felix and Sherry at at least 4 hearts each. It is implied that Lloyd and Sherry have an arranged marriage set up (which can be proved when you go to Felix for approval). If you marry Lloyd, he will continue to run his stand at the bazaar and will move in on the farm.

Lloyd is in his house going over his merchandise when he notices that he has misplaced an invoice he needs in order to pickup an order. When you arrive, he explains that he lost an invoice for a rug he was going to pick up and sell at the bazaar.


Lloyd's going to keep looking and asks if you can leave.

Lloyd is visiting Felix, telling the mayor stories of his travels. Felix loves to hear the tales that Lloyd experiences as he travels all over the world, especially stories about foreign customs and cultures. Lloyd explains that he does a lot of traveling and Felix lets him use his spare house in exchange for stories. Felix asks if you'd like to listen too.


That's a shame, but Lloyd is not surprised. Felix asks that if you need something, to come back at another time.


Lloyd doesn't mind the additional listener, and proceeds to tell another story. It seems to have put Felix asleep though... Lloyd invites you to stop by when he's at Felix's if you want to hear more stories.

Lloyd is standing on the bridge and invites you to talk to him for awhile, since you were interested in hearing his stories.


Lloyd explains how he just visited a town that was run entirely on steam power, kind of how Zephyr Town runs on wind. They also had steamed powered machines too; trains, farming equipment, and even lights.

He mentions how you are a good listener and he enjoys talking to you. He'll tell you another story next time you meet.


Lloyd is okay, and wishes you luck.

Lloyd says you're a little strange, but not in a bad way. He fells like you give him your full attention when he talks, as though you are really interested in what he has to say. Lloyd has never met a woman who is as interesting to talk to as you are, and he's been all over the world! Lloyd wants to know if you enjoy talking to him as well.


He's happy to hear you say that. Since it is getting late, Lloyd believes he should let you go home so you can get up early to work on your farm.


He understands. Lloyd has work to do and asks you to leave.

Marian and Lloyd are talking by the café when Sherry meets up with them. Marian explains that Lloyd was showing her a flower that he picked up on one of his latest trips. Lloyd gives Marian the flower as a gift, and tells Sherry that he has one for her too; many of the girls in the country he was in were wearing them. He puts it in her hat for her and she thanks him. Now she looks like a flower princess, he tells her. Marian thinks the flower looks cute on her too.

Lloyd is at the house to see Felix, but Sherry tells him that her father isn't home at the moment. She offers to take a message for him. Lloyd just had some new stories to tell him about his travels, so he doesn't really need to leave a message.

Lloyd notices that Felix hasn't been home a lot lately. Sherry explains that her father has been very busy and he seems tired. She is getting worried that he's exhausting himself by working too much. Lloyd mentions that she has not been smiling recently, and she admits that she might be a little tired too. It's sweet of Lloyd to notice though.

Sherry figures she just needs to cook something up that will give her father some energy. Lloyd likes that idea, and offers to find an exotic recipe for her.

Lloyd and Sherry bump into each other walking through town. Lloyd asks how Sherry's cooking was going, and she admits that the recipe and ingredients he gave her were great. He's glad to hear that, since her cooking must be why Felix has so much more energy lately. Sherry says it is all because of him, and he tells her he's going to bring more unusual ingredients to her the next time he visits.

Sherry asks if he would join them for dinner, but he can't tonight. He tells her he will sometime soon though. Sherry says that she'll think of a recipe just for him.

Lloyd is going up the stairs to Felix's office when he bumps into Sherry. She mentions that she doesn't see him upstairs very often, and wanted to know if there was a reason. Lloyd tells her that he doesn't have a excuse, but he just wanted to see her. He doesn't need a reason for that! 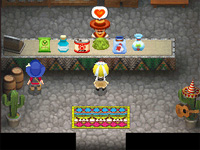 Enter Raul's shop between 1pm and 4pm on a Monday or Thursday during good weather. Raul must be at 40,000 FP (5 hearts) or more and Lloyd cannot be married.

You and Lloyd are in Raul's shop browsing his wares. Raul seems unhappy about Lloyd being in his shop since they are rival shopkeepers. Lloyd requests to buy all of Raul's wares. Raul agrees to sell Lloyd his stock for the inflated price of 1 million gold.

Lloyd is outraged, but Raul will not budge from his offer. Lloyd offers to give Raul something he might want in return to lower the price. He tells Raul that he has sold out tickets to a show Marian really wants to see. At the sound of Marian's name, Raul changes his mind and agrees to cut the price.

Retrieved from "https://harvestmoon.fandom.com/wiki/Lloyd_(GrB)?oldid=125293"
Community content is available under CC-BY-SA unless otherwise noted.