The Mayor is a main villager in Harvest Moon 64.

The Mayor is responsible for running events, festivals, and introduces the player to his farm. In Harvest Moon 64, he is a nameless character. In later versions of Harvest Moon, he is named Thomas.

If the player chooses to, the Mayor may take the player on a tour around the village. He is the father of Maria, and lives with his wife and daughter in town. He is often (unintentionally) rude and gets swindled by Sammy, going so far as to spend a great deal of his savings on Sammy's scams. His favorite gift is potatoes. 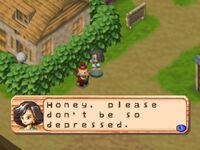 Retrieved from "https://harvestmoon.fandom.com/wiki/Mayor_(HM64)?oldid=138339"
Community content is available under CC-BY-SA unless otherwise noted.