Throwing three cucumbers into Mother Hill Lake between 11AM and 5PM

The Mystic Berry is a special fruit in Harvest Moon: Back to Nature that halves your fatigue rate.

It can be obtained in any year during Spring, Summer, and Fall but not Winter. It is given to you by the Kappa after offering him three Cucumbers by throwing them into the Base of Mother's Hill lake between 11 AM and 5 PM.

You must stand in front of the two trees on the left side of the lake to make this happen. It is different from the Power Berry but just as useful. After consuming, it does not show up on your Summary Screen.

The Mystic Berry was given a new sprite in the PSP remake Harvest Moon: Boy & Girl. This change is only visible in the Girl version; the Boy's Mystic Berry has no visual difference from any of the regular Power Berries. 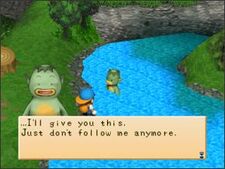 Retrieved from "https://harvestmoon.fandom.com/wiki/Mystic_Berry_(BTN)?oldid=104365"
Community content is available under CC-BY-SA unless otherwise noted.