View source
watch 02:19
Wiki Targeted (Games)
Do you like this video?
Play Sound

Popuri is an eligible bachelorette in Harvest Moon: Friends of Mineral Town.

Popuri is a bubbly and social individual who lives on the Poultry Farm with her family. She works with her brother Rick after their father left town to find a treatment for their ill mother, Lillia. She is slightly naive and admires more worldly individuals such as Karen and Kai, the latter of which she has a large crush on. If you chose not to pursue Popuri's affection, she may marry Kai instead.

If Popuri marries Kai, she will leave Mineral Town with him and only be available in the Summer season when the two return. 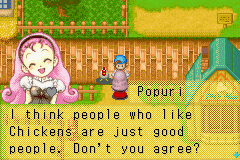 Requirements: Popuri is at a black heart level or higher. Some players find this after entering/exiting Saibara's a few times.

Exit the Blacksmith's between 11AM and 6PM on Wednesday or Friday.[4] You'll see that one of the chickens has gotten loose from Poultry Farm! One picks up the chicken and returns it to Popuri. She thanks the player and asks if he likes chickens.

To make Popuri happy, tell her you like chickens! 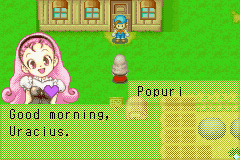 Requirements: Popuri is at a purple heart level or higher, and you've seen the black heart event.

Exit your house in between 6AM and 12PM,[5] and Popuri will be at your door. She asks if she could take a tour of your farm. The player can either tell her that you're too busy, or that one will.

If you choose to show Popuri around your farm, the tour will finish around 1PM. It must be a sunny day before Popuri will come by.

Requirements: You have the largest version of rucksack with an empty slot available. Popuri must be at a blue heart level or higher, and one must have watched the previous events.

This event cannot be triggered in Summer. In any other season, go to the Church in between 10AM and 1PM on a sunny Sunday.[6] You will see Carter, Popuri, May and Stu at the Church. They are all playing, and when you arrive, May suggests playing "house". Carter is uncomfortable with this idea, and asks one to take his place.

If you tell him that one will, you will make Popuri and the kids happy. If you too busy, there are no negative or positive effects. The four of us will go to hot springs to play. May and Stu will eventually wander off, and Popuri will thank you for playing. She'll give you mud balls... yuck.

Requirements: Popuri is at a yellow heart level or higher, and you've seen all of the other events.

Visit the Poultry Farm between 10AM and 1PM, anyday except Tuesday/Sunday.[7] You will walk into a family argument between Rick, Popuri and Lillia. They are arguing about Rod (Rick and Popuri's father), and each have a different opinion. Rick thinks Rod is irresponsible, Popuri thinks that Rick shouldn't say such things, and Lillia only wants the children to stop bickering!

It must be summertime, on a Sunday and on on a sunny day to see the first event. It will take place on Mineral Beach in between 3PM and 4PM.[8]

It must be summertime, and it must also be sunny outside. Go to Mineral Beach between 9AM and 7PM to see Kai and Popuri talking.[9]

Popuri has come to thank Kai for the food that he made for her mother. Rick interrupts, however, and is very upset that Kai is talking to his sister. Rick demands that Popuri comes home, and after a few exchange of words between Rick and Kai, Popuri agrees to go home.

You must wait until summertime in Year 2 or later. Make sure it's sunny, then walk down to Mineral Beach on a Sunday in between 2PM and 4PM.[10]

Kai and Popuri are talking about their families, and Popuri still doesn't understand why Rick doesn't like her seeing Kai! Kai defends her family however, at least they're nice, unlike his own family. Popuri is jealous that Kai has been able to travel, and says she wishes to do so in the future.

It must be Year 4 or later to see the last rival event. Enter the Poultry Farm between 11:30AM to 4PM on any day except for Sunday.[11]

Kai and Popuri will announce that they are leaving Mineral Town together! Rick disagrees (naturally), and starts to blame Kai for planting this idea in his sister's head. Lillia diffuses the argument, and gives Popuri her permission. Lillia's only request is that Kai keeps Popuri happy forever. Kai and Popuri will get married 7 days after this event.

A season after you and your spouse are married, your wife (or you, if you are playing MFoMT) will not be feeling well one morning. You will go to the clinic, and the Doctor will announce that your wife/you are pregnant.

Your wife/you will give birth in 60 days, and you will have a baby. For the first 60 days, it will be sleeping in the bed and you cannot interact with him or her, but after those 60 days, your baby will grow into a toddler, and you can talk and give gifts to him or her.[12]

This event can be seen during the Spring season, any time between the 10th and the 17th.[13]

Visit Zack at his home, and Popuri will come in shortly after you. She asks Zack if a package has come for her. Zack tells her that it has and gives it to Popuri. It turns out that the package is a birthday present for her mother, so she asks that you and Zack swear secrecy to not ruin the surprise. Agree not to tell Lillia, and both Zack and Popuri will be happy.

During the summer season only, enter the Poultry Farm between 11AM and 1PM.[14]

Lillia will tell you that the store isn't open for business today, as she's feeling a little bit under the weather. Popuri and Rick are nowhere to be found, until Rick returns to the house with medicine with Popuri following shortly after, also bringing back medicine! Lillia is happy that her children both care so much about her.

After the event is over, the Poultry Farm will be locked until the following day.

Visit the Poultry Farm during the summer season between on any day except for Sunday or Tuesday in between 11AM and 1PM. Additionally, Popuri and Rick cannot be married, and it must be Year 3 or later.[15]

Lillia was about to open a letter when you arrive. She says that it's a letter from her husband! In his letter, Rod asks how his family is doing, and talks about his travels on the search for the flower to cure Lillia. He asks that the shop be well taken care of while he's gone.

Cooking for the Girls

After you've expanded your house and purchased a kitchen, try cooking anytime after 8AM. There is a chance that Ann, Popuri, Karen and Mary will stop by.[16]

Each of them have come to ask if you'll cook them something using your new kitchen. If you speak to each of the girls, they will each have a different request for what they'd like to eat:[17]

This event may happen more than once and only happens in More Friends of Mineral Town.

After buying your big bed, you'll randomly see this event. Before you go to bed at night, you'll hear a knock at the door. Ann, Mary, Popuri, Karen, and Elli have all showed up at your doorstep.

The girls have heard that you purchased a big bed and want to sleep in it. With all five of them in the bed, it seems a little bit cramped and uncomfortable. The girls leave after deciding that the bed isn't big enough for all of them.

The event starts when your character walks into Kai's restaurant between 5-7 PM.[18] Triggering the event will cause the day to end.

After all the customers have been served, your character, Kai, and Popuri are alone in his restaurant. Kai is tired after working so hard. He tells Popuri that he's grateful for the customers, but she brought too many! Popuri apologizes for overdoing it and Kai admits that he might be glad that he has such few customers. He thanks your character and you go home.

After Kai and Popuri have been married and they return in summer, visit Kai's Snack Shack between 5 and 7PM.[19]

Kai is busy cooking when Popuri walks in the door excitedly. Popuri puts on her charm and drops the hint to her husband that there's a beautiful necklace at Saibara's shop that she'd like to look at. Kai is worried about how expensive it is, and says that he's not going to spend a lot of money on a necklace for her.

Popuri becomes upset and eventually convinces her husband into buying the necklace for her.