Rick is an eligible bachelor in Harvest Moon: More Friends of Mineral Town.

Rick is a kind-hearted young man who runs the Poultry Farm with his family. As the head of the household, he has to worry about his ailing mother and his younger and naive sister, Popuri. He has a certain resentment towards his father, Rod, who left long ago to search for a cure to his mother's illness. He takes issue with the fact that Popuri spends her summers with Kai, possibly because he seems to be romantically interested in his sister.

Rick tries his best to protect his sister, care for his mother, and maintain his relationship with his long time friend, Karen. He also works hard to help run the Poultry Farm. His temper can be short, but deep down, Rick means well.

Requirements: Rick is at a black heart, have an empty slot in your rucksack.

Walk into the Poultry farm between 11AM and 1PM on a Monday, Wednesday or a Friday to see this first event. Rick will have some Spa Boiled Eggs set out on the table, how fortunate that your character has stopped by!

Rick will ask if you like eggs, and if you answer with, "LOVE them," Rick will give your character a Spa Boiled Egg.

Requirements: Rick has a purple heart, and you have watched the black heart event.

This event will take place at the Poultry Farm on a Tuesday, Thursday or Saturday between 11:30AM and 1PM.[4] Rick says it's very impressive that you're doing all the farm work by yourself, and that it must be very difficult!

To prove your knowledge, Rick will ask you a question about how many days it takes an egg to hatch. Answer with, "3 days," and Rick will be further impressed.

Requirements: Rick has a blue heart, and you've seen the previous events. You must also have the largest version of the rucksack in the game, with an empty slot available.

Walk into the Poultry Farm on a Monday, Wednesday, Friday, or Saturday between 11AM and 3PM.[5] Rick will greet you, and talk about his Father. Finding a treasure in his room reminded him of his Father, who left long ago to seek a cure for the illness that his Mother has. Rick misses him very much, and hopes that he will return soon.

Rick is worried that he is upsetting you, but if you assure him that he's not, he will thank you by giving you his treasure.

Requirements: Rick has a yellow heart, and you've seen all of the previous events.

At Doug's Inn, you'll find Rick for the last event. Walk in on a Tuesday, Wednesday or Friday between 8:30PM and 10PM.[6] Rick invites you to have a drink with him, and you slowly lose track of time. The two of you were having such a nice conversation, and it's gotten so late out! Rick offers to walk you home, and if you answer that you would like an escort home, he will do so.

Rick will walk you home, and will let you know that he really likes spending time with you.

You must exit the Spring Mine on a sunny day. It can be Wednesday, Thursday, Friday, or Saturday between 11AM and 6PM.[7]

Karen will ask Rick about his Father. Rick instantly becomes upset, because he hasn't heard from his Dad, and he doesn't understand why he could just run off like he did! Karen defends his Dad, explaining that he only left to find a cure for Lillia.

Karen says that they can take care of things when he's gone, and Rick agrees.

If it's Sunny, exit Gotz's house on a Sunday or a Monday. Alternatively, you can also exit out of the northeastern entrance coming from Mineral Town. The time must be in between 11AM and 6PM.[8]

You will see Rick and Karen talking about their childhood. Rick laughs at a memory he had of Karen, and it makes her angry. He doesn't understand why, as she storms off.

Enter the Spring Mine, and then exit to see this event. It must be on a Wednesday or Friday between 11AM and 6PM on a sunny day.[10] Rick saves Karen from a dog that nearly attacked her! He's bleeding, but says that it's alright because Karen is safe.

Karen is very worried, but eventually thanks Rick for helping her.

It must be Year 4 or later, after watching all of the other events to get this last event. Go to the Poultry Farm on a Tuesday, Thursday, or Saturday between the hours of 1PM and 4PM. Enter the building, and leave.[12] When you do, you will see Rick, Lillia, and Karen.

Karen and Rick talk about Lillia's health, she appears to be doing much better. This makes Rick and Karen very happy. Lillia will come by, and her only concern is Rick and Karen's relationship! Rick gets embarrassed when Lillia asks if he's going to propose to Karen soon. Their feelings have always been apparent, so why hide it?

Karen and Rick will get married 7 days after this event.

A season after you and your spouse are married, your wife (or you, if you are playing MFoMT) will not be feeling well one morning. You will go to the clinic, and the Doctor will announce that your wife/you are pregnant.[13]

Your wife/you will give birth in 60 days, and you will have a baby. For the first 60 days, it will be sleeping in the bed and you cannot interact with him or her, but after those 60 days, your baby will grow into a toddler, and you can talk and give gifts to him or her.[14]

During the summer season only, enter the Poultry Farm between 11AM and 1PM. [15]

Lillia will tell you that the store isn't open for business today, as she's feeling a little bit under the weather. Popuri and Rick are nowhere to be found, until Rick returns to the house with medicine with Popuri following shortly after, also bringing back medicine! Lillia is happy that her children both care so much about her.

After the event is over, the Poultry Farm will be locked until the following day.

Visit the Poultry Farm during the summer season between on any day except for Sunday or Tuesday in between 11AM and 1PM. Additionally, Popuri and Rick cannot be married, and it must be Year 3 or later. [16]

Lillia was about to open a letter when you arrive. She says that it's a letter from her husband! In his letter, Rod asks how his family and the farm is doing, and talks about his travels on the search for the flower to cure Lillia. Lillia says that she's very happy to hear news from her husband. 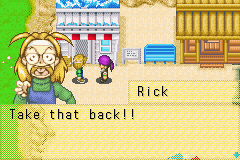 During the Summer season, walk onto Mineral Beach between 1PM and 5PM. [17]

Rick finds Kai at the beach and starts to yell at Kai about his sister, Popuri. Rick doesn't want Kai hanging around his sister, but Kai tells Rick that Popuri should have the right to do whatever she wants. In fact, Kai feels bad that Popuri has Rick for a brother!

Rick angrily storms off, unable to believe that Kai could say such a mean thing to him.

The event starts when your character walks into Kai's restaurant between 5-7 PM.[18] Triggering the event will cause the day to end.

After all the customers have been served, your character, Kai, and Popuri are alone in his restaurant. Kai is tired after working so hard. He tells Popuri that he's grateful for the customers, but she brought too many! Popuri apologizes for overdoing it and Kai admits that he might be glad that he has so few customers. He thanks your character and you go home.

This event can only be seen after Karen and Rick get married. Visit the Poultry Farm between 4:30PM and 7PM in any season that's not summer. [19]

At the Poultry Farm, you'll see Rick and Karen talking. Rick is feeling anxious about the store. Because Popuri has gotten married and moved away, she's not here anymore to help with the farm. Rick doesn't know when his father is going to return either! Karen tries to comfort her husband and assures him that she can help with the farm in Popuri's place.

Retrieved from "https://harvestmoon.fandom.com/wiki/Rick_(FoMT)?oldid=133487"
Community content is available under CC-BY-SA unless otherwise noted.