Rock sees himself as a fun loving and popular guy who is good with the ladies. He is very laid back and doesn't take much seriously. He lives at the Inner Inn with his mother Ruby, although you won't see him helping her out with any of the chores. He is proudly unemployed and spends most of his time wandering the valley. His close childhood friend Lumina will be your rival for his affection.

Rock spends most of the day out in the valley. He goes for a walk to the spring or can be found at the beach during the day. In the evenings, he can be seen at the Blue Bar or goes back to the Inn. If Rock marries Lumina, he moves in to the mansion with her.

Go to the beach on a sunny Monday, Wednesday or Friday to find Rock. He will tell you that he's been staring at the ocean. He compliments himself, saying that the ocean is beautiful.. like him! When you have no reply, Rock assumes you're simply smitten by him and have no words.

If you play along and tell Rock that he's memorizing, he'll say that you can stare at each other for awhile. After a few moments, Rock will laugh to break the silence and the event will end. 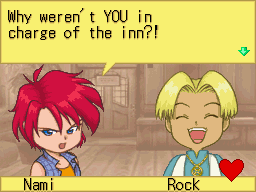 Location: Inner Inn
Time: 11:00am until 4:00pm during Rain, cannot be Tuesday or Friday

After witnessing the black heart event and getting Rock's affection up to a purple heart, visit the Inner Inn during the trigger time on a rainy Monday, Wednesday, Thursday, Saturday or Sunday.

When you arrive, Nami greets you and explains that she's taking care of the Inn while Ruby's out on an errand when Rock suddenly comes into the room for lunch. Nami tells Rock that he should be taking care of things because he's Ruby's son. The two argue about who should take responsibility and ask for your opinion.

If you side with Rock that Nami should do the work, Nami becomes even angrier but it appeases Rock. He leaves the Inn to go and find food elsewhere. After Ruby returns to the Inn, the event ends.

On any sunny Tuesday when Rock has a blue heart or more, walk on the path to the Goddess Pond.

Rock is standing near the pond and asks your character to come over to talk to him. He starts up a conversation and tells you that Lumina and him recently went on a date but it didn't turn out well so he came here to relax. Rock explains that he asked if he could kiss Lumina, and she got upset and ran off! Rock doesn't think it's all that weird, and then asks if he can kiss you.

If you tell Rock that he can, he'll ask you to close your eyes. Nothing happens, and you soon discover that Rock played a trick on you! You storm away from the pond angrily, leaving Rock confused.

Location:
Rock's Bedroom Time: 6am until 11am

After witnessing all of Rock's other events and getting this heart color up to yellow, visit Rock's room at the Inner Inn early in the morning.

Rock is deep in thought when you enter the room and welcomes you in. After asking you how your farm is doing, Rock starts to talk about what's on his mind. He surprisingly starts to go on and on about Lumina! Getting increasingly annoyed, you ask Rock if he and Lumina are dating. Rock didn't even realize he was talking so much about Lumina!

He confesses that he actually likes you a lot more than her, but talked about her to cover up his feelings. He apologizes for upsetting you.

Rock and Lumina are standing near the Goddess Pond. He asks her if she use to like him in the past. Lumina denies it but Rock (in his arrogant way) smiles and believes it to be true. Even as she continue to deny it, Rock laughs and tells her it's a secret between the two of them

Rock compliments Lumina on how cute she is, but she tells him he's still not going to get anywhere. Rock laughs and meant that she was childish in a cute way. Even though Lumina is now angry at him she is still so cute!

Rock and Lumina are back by the pond, where Rock tells her that there use to be a Goddess in the pond. She's still doesn't believe him about liking him in the past. Doesn't she remember when she was the Goddess and Rock was her subordinate?!

She mildly remembers someone falling into the pond, so Rock tells her the story of when she slipped and fell into the water. She didn't come back up so he jumped in to help her. Lumina thanks him for helping her out that day.

(There is an error with the North American version of the game that causes the scenes of the Orange event to trigger as you exit the Sprite Tree instead of the Green event. When the event ends you are left at the Beach.)

Lumina and Rock are talking to each other on the beach. It looks like Lumina is upset, but she won't tell Rock why. He tells her he can't leave the girl who likes him alone when she's crying. Rock's bold statement cheers her up a little bit and when he playfully asks if she's fallen in love with him she admits that she has.

(You will see this scene twice in the North American version; once as the Green event and again at the Orange. When you see it a second time then the rival series is finished and they will marry a week later.)

Retrieved from "https://harvestmoon.fandom.com/wiki/Rock_(DS)?oldid=131195"
Community content is available under CC-BY-SA unless otherwise noted.