"The mayor's daughter. Often worries about her dad. Loves the town very much."
―In Game Description

Sherry (シェルファ Sherufa, lit. Shelfer) is a character in Harvest Moon DS: Grand Bazaar. She is one of the eligible bachelorettes to court.

The mayor's daughter, Sherry cares deeply for Zephyr Town. She is well known and well liked by the villagers, and her father Felix is very protective of her. She is also good friends with Lloyd, and it will be necessary to befriend both Felix and Lloyd in order to marry Sherry. Lloyd is also your rival for Sherry's affection, and is implied that the two have an arranged marriage set up.

She lives at the Mayor's home with her father. Sherry leaves her home to go out for walks around town during sunny weather, and she will help at the Hotel on Wednesdays.

Sherry has a booth at the weekly bazaar where she sells tree seeds. However, she will not sell anything until you make 40,000g worth of profits at the bazaar and upgrade it to level two.[1] Her stall is next to Chen's.

You bump into Sherry in the town plaza and chit-chat about the weather. Claire and Nellie will greet the two of them, and Sherry will thank Claire for a cake that she had shared with her. Claire's cake is so tasty that Nellie wants Claire to bring her some too!

After those two women leave, Ethel and Stuart spot Sherry and the player in the plaza. Ethel thought she had seen Sherry from a distance, so they came closer to confirm it. Stuart is always impressed by his wife's sharp eyesight. Ethel thanks Sherry for the note she passed along to them the other day. Stuart also gives Sherry a friendlier-than-necessary thank you complement, which annoys his wife enough for her to chase after him.

Sherry seems to be very popular! Your amazement embarrasses her and she asks if there's something wrong.

You really know everyone! (+3000 FP)
She giggles and believes that you will know everyone soon too. Sherry doesn't want to keep you from your work, but suggests when you have a free time, the duo can chat again.

Sherry is watching the waterfall. Is there something she can help you with?

What are you up to? (+3000 FP)
Sherry is just relaxing since she has finished doing all of her chores. Sherry invites you to stay with her for a little bit, and starts to ask about your farm job. She thinks it is a fantastic, and hopes to someday be able to buy your farm products at the bazaar. Maybe you'll even give her a discount!

Nah, I'm just wandering. (-2000 FP)
Sherry wishes the protagonist and they walk off.

Felix is trying to tell his daughter how much he appreciates all the chores that she does, and seems to feel a little guilty for having her work so hard. Sherry reminds him that he is the mayor and has a whole town to look after. When you walk into the room, Felix is annoyed that you may have heard some of their conversation. Sherry apologizes for her father's outburst.


Felix apologizes for his outburst and hopes you return home safely.


Sherry's not sure what is wrong. She was busy cleaning when her father suddenly started apologizing to her. Felix explains that his wife died shortly after his daughter was born, so he has been raising her by himself. He isn't very good at household chores and feels terrible that she spends so much time doing them. Felix feels guilty for not giving her enough free time to be normal.

Sherry explains to her father that she doesn't mind the chores at all. Besides, when Sherry gets married, she'll have to do her share of the chores anyway. The talk of marriage gets Felix in an overprotective mood, and he begins to demand who she plans on marrying. It was just an example Sherry was talking about, and asks you for confirmation. Now Felix thinks that somehow you're involved in his daughter's marriage fantasy! Sherry tells you to quickly run away before her father catches you.

You are walking along when Sherry catches up to you. Do you have time to talk with her? No problem; the two of you head to a more secluded area.

Sherry seems nervous, but wants to talk to you about her father. He lacks any skills for doing chores! She is wondering if she does get married, if he is going to be okay. What do you think?


You're right. He's a grown man so he'll be okay. Sherry feels better now. She apologizes for asking such a random question.

Marian and Lloyd are talking by the café when Sherry meets up with them. Marian explains that Lloyd was showing her a flower that he picked up on one of his latest trips. Lloyd gives Marian the flower as a gift, and tells Sherry that he has one for her too; many of the girls in the country he was in were wearing them. He puts it in her hat for her and she thanks him. Now she looks like a flower princess, he tells her. Marian thinks the flower looks cute on her too.

Lloyd is at the house to see Felix, but Sherry tells him that her father isn't home at the moment. She offers to take a message for him. Lloyd just had some new stories to tell him about his travels, so he doesn't really need to leave a message.

Lloyd notices that Felix hasn't been home a lot lately. Sherry explains that her father has been very busy and he seems tired. She is getting worried that he's exhausting himself by working too much. Lloyd mentions that she has not been smiling recently, and she admits that she might be a little tired too. It's sweet of Lloyd to notice, though.

Sherry figures she just needs to cook something up that will give her father some energy. Lloyd likes that idea, and offers to find an exotic recipe for her.

Lloyd and Sherry bump into each other walking through town. Lloyd asks how Sherry's cooking was going, and she admits that the recipe and ingredients he gave her were great. He's glad to hear that, since her cooking must be why Felix has so much more energy lately. Sherry says it is all because of him, and he tells her he's going to bring more unusual ingredients to her the next time he visits.

Sherry asks if he would join them for dinner, but he can't tonight. He tells her he will sometime soon though. Sherry says that she'll think of a recipe just for him.

Lloyd is going up the stairs to Felix' office when he bumps into Sherry. She mentions that she doesn't see him upstairs very often, and wanted to know if there was a reason. Lloyd tells her that he doesn't have a excuse, but he just wanted to see her. He doesn't need a reason for that! 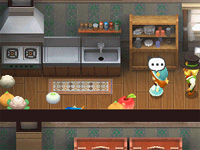 Enter Felix's house in between 9am and 11am on a Saturday on Sunday during good weather. Felix and Sherry must both be at 30,000FP (4 hearts) or more. Additionally, Sherry cannot be married.

Felix is in the kitchen, trying to cook. He's determined to make something using the cookbook that he has as a guide. One suggestion in the cookbook is to boil vegetables so they become softer.

As Felix goes to get a pot to set on the stove, he realizes the stove is too hot for him! As he runs around the kitchen in a panic, he makes a bit of a mess. Sherry comes running at the commotion her father has made. Sherry notices the mess that Felix made and immediately kicks him out of the kitchen so that she can clean up.

Antoinette notices that Sherry looks pretty cheery lately. Sherry explains that she has a new necklace and she's been receiving a lot of complements on it. It's the necklace that she got from Antoinette! Antoinette says that she made it special just for Sherry to match her hair and eyes. Sherry says she'll treasure it forever.

Retrieved from "https://harvestmoon.fandom.com/wiki/Sherry_(GrB)?oldid=131119"
Community content is available under CC-BY-SA unless otherwise noted.