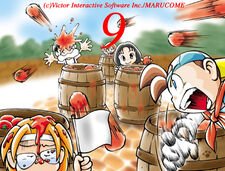 The Tomato Festival is an annual event in Harvest Moon: Back to Nature. It is held on the 12th day of Summer, between 10:00 am and 2:50 pm, in Rose Square.

The main activity during this festival is the tomato fight in which you and your team throws tomatoes at the opposing time while dodging the tomatoes thrown at you. This takes place during the tomato throwing mini game. 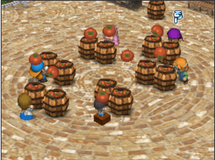 In this mini game, there are two teams who throw tomatoes at each other. Speaking to the mayor will allow you enter the competition. In order to compete, you must speak to the following team members as stated below between 10AM and 2:30PM.

There are four teams in the festival that the player can join (automatically replacing one of the team members) Talk to the following people to be asked if you want to join their team:

Agreeing to join will start the round automatically.

After selecting a team, Mayor Thomas will explain how to play:

If you get hit by a tomato, you're out of the game until the next round. Defeat two teams to win the competition.

Retrieved from "https://harvestmoon.fandom.com/wiki/Tomato_Festival_(BTN)?oldid=128317"
Community content is available under CC-BY-SA unless otherwise noted.