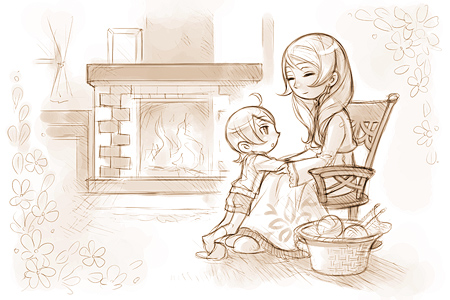 When I was seven years old, my mother died.

On a hill where spring light was pouring down, I once seen flowers surrounding my mother that are as beautiful as the Harvest Goddess.
My father quietly stepped close to me, held me close and said

I only wanted to cry, I loudly sobbed.
I was a frail child. Father had lost the support of Mother, and now seemed terribly helpless.

In her lifetime, from a young me's perspective she was a beautiful womanで、病弱な体のせいだろうか、
控えめで優しい雰囲気の人だった。Mother was always knitting near the fireplace; I liked to sit close and watch.
When father returned from work, everyone circled the stew warmed by the fireplace. We were a very happy family.

Father was pathetic after my mother's death.
Though people from other towns were concerned and asked about him, Father locked himself in his room and wouldn't meet anyone,
everyday he spent his time looking at a photo of Mother.
At that time, I learned how to do everything. Cooking, laundry, cleaning the town, I did everything.
Looking at the empty shell that was my father, I had to act as my mother's substitute, I thought that by family had become hopeless.

I wanted to try and make my mother's specialty, "ratatouille."
I thought if I did that it would make my father better.
But, no matter what I did, I couldn't get it to taste like my mother's... Missing my mother, I cried by myself.

From that time, the fireplace wasn't used anymore.

I wanted Father to be strong.
I respected Father more than anyone else. He's always working for everyone in town, picking flowers for Mother, and, while gently brushing my head, he always says his favourite saying.

But Mother's death changed Father.
Not thinking at all of other people, 僕を見てくれようともしない。
My father was a different and pathetic person, and I began to feel resentment towards him.

Iが計画を実行してすぐ、Fatherがfacial expression changed, he bursted into my room.

I felt that this was the first time I was seeing my father's pain.
僕は、今までつらそうな父に声をかけただろうか。話をしただろうか……。
Naturally, my words came out.

"What are you saying…"

The three of our matching mugs…, my mother's favourite stew pot…,
My father and my different colour knits that my mother had knitted…

"This fireplace is filled with important memories of you mother.
いつかemotional scars が癒えたらまた、lightをともそう。"

"Father, is it okay if I throw this old book out?"

I peeked into the study, and seen Father viewing at old albums.

I suddenly remembered the hidden ring.

"You heard about the novice rancher who moved into town recently, haven't you?
I'm thinking about giving it to that kid. "

Father seemed to be enjoying himself. He already seemed alright.
Finally a new flameをともす決意ができたのだ。

My father took the book out of the inside of the fireplace and gave it to that rancher.
Father's faceはもう立派なmayorのfaceだった、
あのとき…、Fatherが例のringを見つけたかどうかは、Iはとうとう聞かなかった。

From this winter, a warm light is burning in our house's fireplace.

Retrieved from "https://harvestmoon.fandom.com/wiki/User_blog:Mai_Is_Me/The_Fireplace?oldid=84946"
Community content is available under CC-BY-SA unless otherwise noted.