The Witch Princess (さま Majo-sama, lit. The Witch) is a character in Harvest Moon: DS and Harvest Moon DS: Cute. She is one of the special bachelorettes available to marry in DS (and also best friended only in Japanese version of Cute).

Rival to the Harvest Goddess, the Witch Princess is responsible for the Harvest Goddess turning to stone. She only meant to cast a spell that would mute the Goddess (which she most likely used on Keira, but her spell went wrong and the Goddess was turned to stone instead. When she tried to fix the problem, she sent the Harvest Sprites to an alternate world.

The Witch Princess is an anti-social and mischievous person who likes to cause trouble for the Goddess. She praises the player for littering, letting their animals die, giving her gifts and giving other villagers poisonous mushrooms. She will award the player with a gift that negatively affects their farm rating when carried in the inventory each time she rewards you for your bad deeds.

When she's not causing trouble, she reads books in her house next to Romana's mansion. One of her most prized possessions is her cauldron. She despises dogs, but has a secret love of stuffed bears.

After exiting the Villa, the protagonist hears something. He follows the noise to the shed to the side of the villa. He enters and overhears the Witch Princess talking. She says, unknowing to her that the protagonist is listening, that she regrets what she did to the harvest goddess, but that it was her own fault, as she (in her opinion) wasn't doing anything wrong, and that the Harvest Goddess gets mad too easy. When she's done, she turns around to see the protagonist was listening the whole time. She's angry at first, but then asks if he is also fed up with her.

I'm fed up. She is happy to hear his answer and decides that she likes him. She says that if he ever needs help with anything, she'll help him as much as she can.

I'm not fed up. She gets angry again and tells him that she doesn't like him anymore.

After this encounter, if you throw away a total of ten items from your inventory the Witch Princess will come and give you the "Witch Princess's gift" which looks like some sort of postcard. This item, If you keep it in your backpack it slowly lowers your farms rating. (The following events are only available in the Japanese release, due to the glitch documented below. Still, the requirements for the rest of the heart events- as well as for overall marriage- is shown below.) 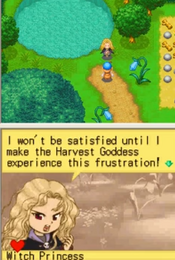 As the player exits the tree, he overhears the Witch Princess yelling at the Harvest Goddess to come out. The player walks up to her and she tells him that she wanted her to come out so she could gripe at her. She had previously invited her for tea filled with laugh tonic in it so that the Witch Princess could kill some time watching her laugh uncontrollably, but the Goddess denied. She says that she won't rest until the Harvest Goddess experiences the same frustration. She asks if you agree.

I agree. She's happy that you agree. Since the Harvest Goddess won't come out, she decides to go home.

I don't agree. She says that you've become a pain and says that she's going home. 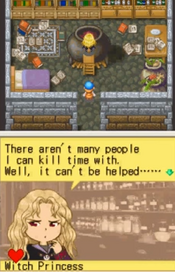 The Witch Princess is extremely bored, but doesn't have anyone to kill time with. She thinks of the Harvest Goddess, but decides that she'll pick someone else since she previously declined her. Then she considers the Harvest Sprites, but she decides that they're too small and irritating. She then decided on the protagonist, but she's embarrassed to ask him to play with her. She turns around and notices him listening. She, embarrassed, asks him if he'd been listening, and asks what his answer is.

I'd be happy to. She happily thanks him, but then doesn't know what she wants to do. She says that it's too much of a pain to decide and apologizes.

Absolutely not. She tells him that she hates him. 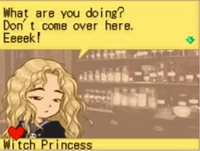 Walking into the witches house, she exclaims that after two hundred years she finally made the potion of her dreams and decides to try it right away. She doesn't want to try it on herself, and wants to use it on someone else. She then notices the protagonist and asks if he's thirsty and offers him a drink.

No, thanks!! She tells him not to worry and yells at him to just drink it. The protagonist gets angry and leaves her house.

Cool, thanks. He drinks it and first feels sick, but then has a heart over his head. The Witch Princess asks him what he's doing as he starts running after her. She decides that the potion was too strong, and uses her magic to make him return to his senses. It works and she tells him that she wanted to try out her love tonic. She thanks him for letting him try it.

Due to bugs introduced in the localization process, which cause the game to not record the number of animals you kill off, the Witch Princess is not marriageable in some the NA release of the game by normal means. more info on this here

Retrieved from "https://harvestmoon.fandom.com/wiki/Witch_Princess_(DS)?oldid=131897"
Community content is available under CC-BY-SA unless otherwise noted.